So you too can have your slow-mo Baywatch moment.

In your ultimate case of #tbt, we have 17 throwback beach scenes spanning iconic moments 1953 – 2005, from Burt Lancaster and Deborah Kerr’s steamy affair in From Here to Eternity to everyone’s favorite TV gang – Saved by the Bell, taking a turn at the Malibu Sands Beach Club. We’ve even hunted down the perfect swimsuits to help you get the look, including a near replica of Ursula Andress’ famed belted Dr. No bikini and some rather incredible high cut one-pieces to make all of your 90s dreams come true. 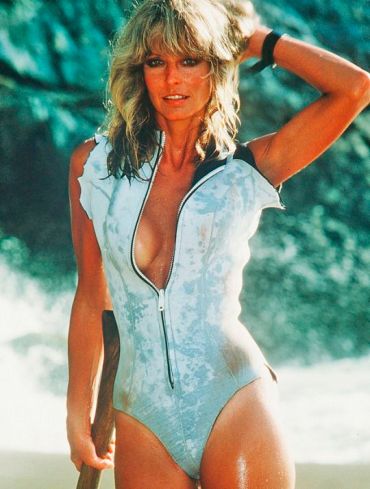 The Scene: Before she was Carrie, Sarah Jessica Parker was California girl SanDeE (yes, that is how the character’s name is spelled) in the ’91 romantic-comedy-satire LA Story with Steve Martin. 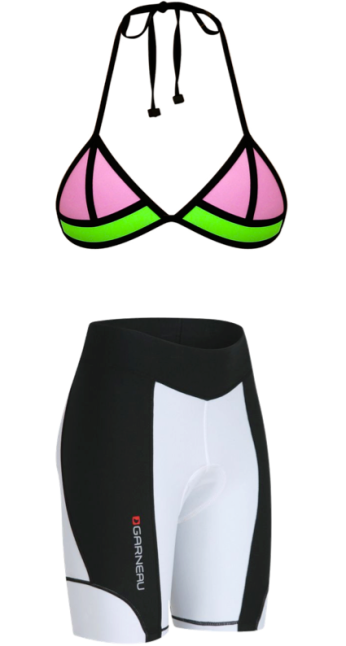 The Scene: Elvis himself swooning to Joan Blackman in the musical romantic comedy Blue Hawaii, 1961. 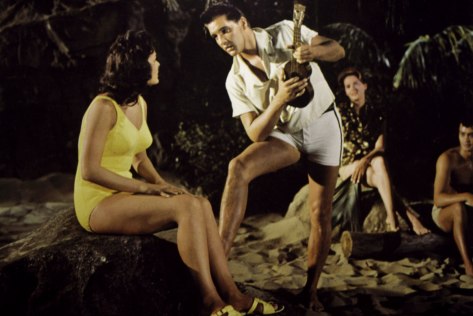 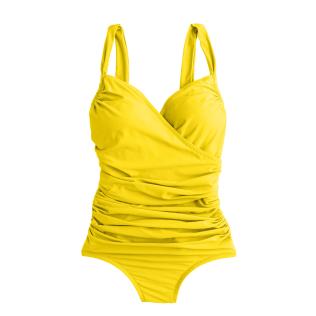 The Scene: Who can forget this epic moment with Cameron Diaz and Demi Moore in 2003’s Charlie’s Angels: Full Throttle? At 41, Demi successfully made the case of barely there-bikinis for women at nearly any age – and just about stole the screen from Cameron in the process. 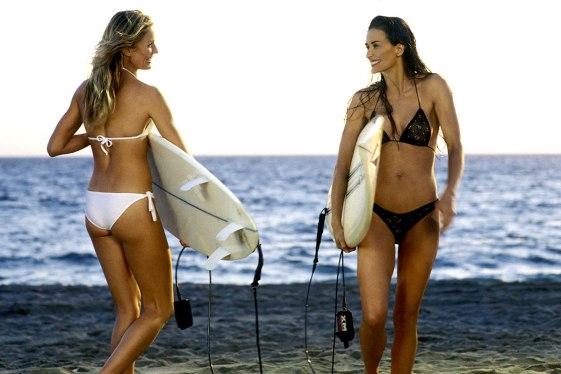 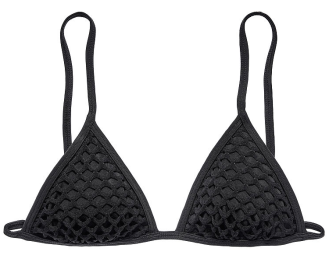 The Scene: 15 year old Brooke Shields’ iconic breakout role as the controversial Emmeline, a shipwrecked Victorian-era traveler who comes into sexual maturity while marooned with her cousin on a South Pacific island in Blue Lagoon, 1980.

Get the Look: She Made Me handmade cotton crochet “Daisy” One Piece with shell button detailing, $160.00 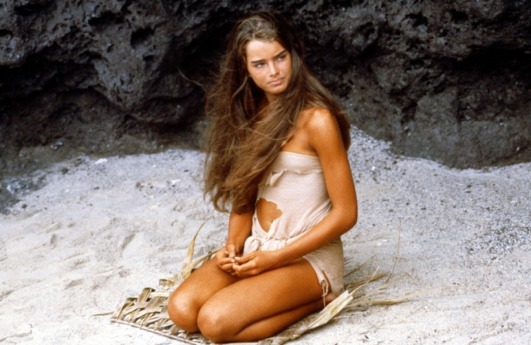 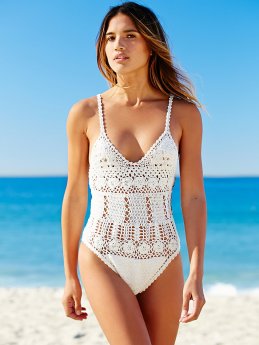 The Scene: How Did Stella (Angela Basset) Get Her Groove Back? In the arms of a young, dashing Taye Diggs in this 1998 romantic comedy, naturally. 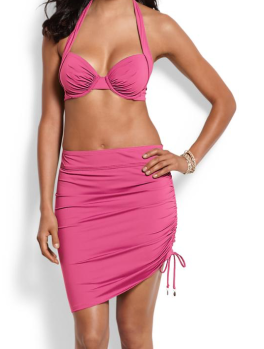 The Scene: Brigitte Bardot discovering her media circus love life is not-so-private in the 1962 French Film, A Very Private Affair. 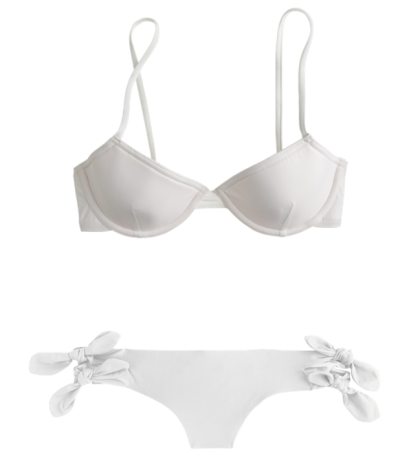 The Scene: For 6 glorious episodes in Saved by the Bell’s 5th season, everybody’s favorite TV gang spent their summer working at the Malibu Sands Beach Club. Hijinks, schemes and love all ensued, including a fleeting romance between Zack and Stacey Carosi (Leah Remini). Our favorite part? The epic early 90s beach attire, natch. 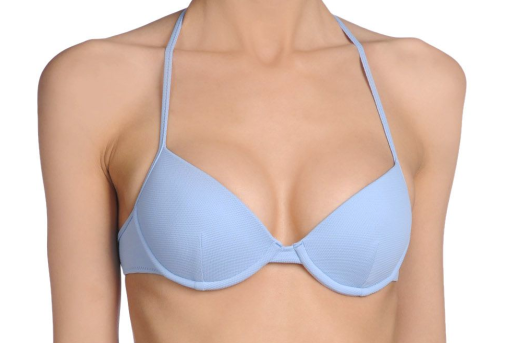 The Scene: Burt Lancaster and Deborah Kerr engage in a steamy Hawaiian affair in the 1953 Academy Award-winning romantic drama, From Here to Eternity.

Get the Look: Estuaries’ “Hudson” Vintage Inspired Jumpsuit-Swimsuit in Black, $350.00 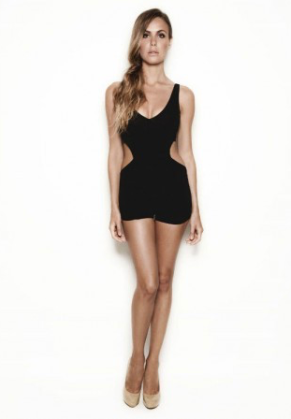 The Scene: Doesn’t get much more iconic than Baywatch, everyone’s favorite blend of beaches, babes and bikinis running nearly a decade throughout the 90s – that later went on to become one of the most-watched television shows worldwide. 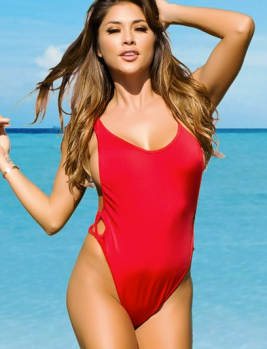 Get the Look: She Made Me’s Crochet Cotton Triangle Bikini in Off-White, $195.00. Bonus: this suit is hand-crocheted by Indonesian artisans using an original 1970s swimwear pattern as the template.

The Scene: Jessica Alba’s turn as a treasure-seeking diver ending up with more than she bargained for alongside Paul Walker in 2005’s action drama, Into the Blue.

The Scene: Ursula Andress as the ultimate Bond Girl (alongside Sean Connery) in the very first film of the franchise, 1962’s Dr. No. The iconic “coming out of the water” scene was later replicated by Halle Berry in 2002’s Die Another Day. 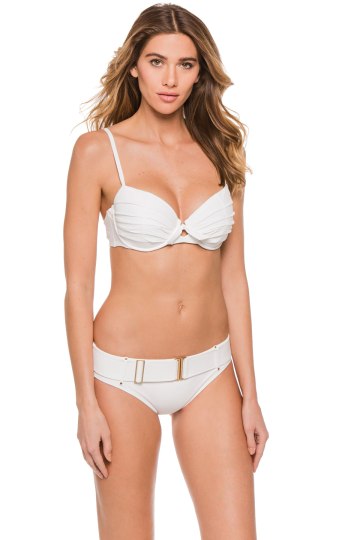 The Scene: Amidst the blue waters of sun-drenched Italy in the late 1950s, la dolce vita-living Marge (Gwyneth Paltrow) and Dickie (Jude Law) have no idea the dangerous extremes their new friend Tom Ripley (Matt Damon) will go to to assume their lifestyle in the 1999 thriller, The Talented Mr. Ripley. 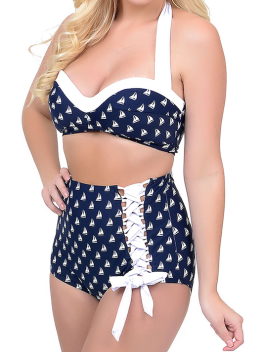 The Scene: In Bo Derek’s 1st major film appearance in 1979’s romantic comedy 10, a lovestruck Dudley Moore follows her, and her new husband, to their honeymoon in Mexico where comic encounters ensue.

Get the Look: Ale by Alessandra One-Piece Fringed Monokini Halter, $184.00 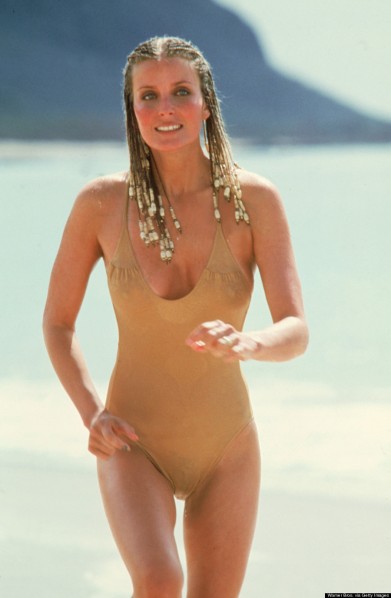 The Scene: The film that undoubtedly made you a believer in love, Rachel McAdams and Ryan Gosling strike a chord in everyone’s hearts as star-crossed lovers in 1940s South Carolina. Hardly an introduction needed – this is 2004’s poignant love story, The Notebook. 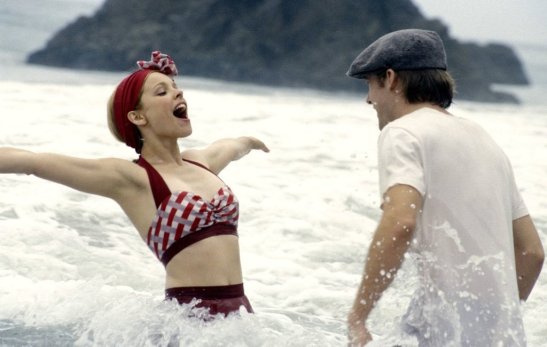 The Scene: Michelle Rodriguez, Kate Bosworth and Sanoe Lake give a new face to girl power by conquering waves – and love, in the 2002 cult-following surf flick Blue Crush. 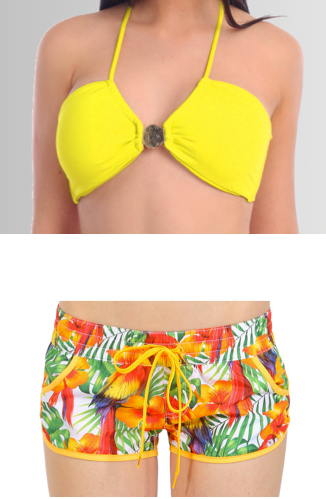 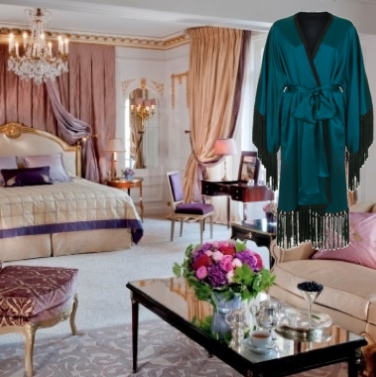 Stalk Us on IG!

Friend us on FB!

Friend us on FB!